From 1897 to 1907 the main mining company in the area was the “Anglo Italian Talc and Plumbago Mines Company Ltd.” Amongst the shareholders there were members of the Huntriss family and George Huntriss was the president.
Piero Sartorio keeps in its records pictures about them and some notes. 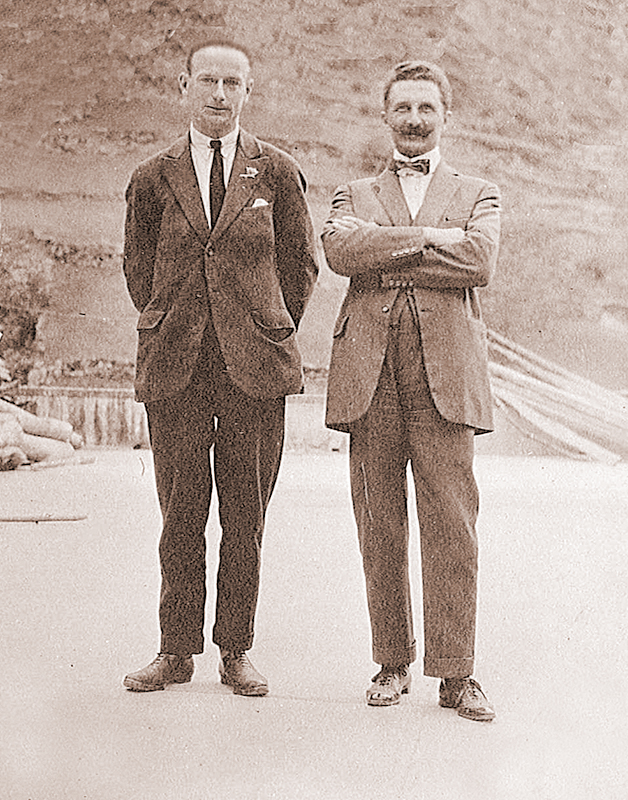 This is how Piero Sartorio describes this picture.
Over many years, during spring and summer, Ettore Huntriss [left] (who already stayed many times in Pinerolo as a young boy when his father was the owner of the Anglo Italian Talc and Plumbago Mines Company Ltd) came to Pinerolo to practice office work and improve his Italian. Here we see him during a visit by us in Perrero. The picture was taken together with my father [Damiano Sartorio - right] on the terrace of the cable-way [in the village Perrero].
In its notes,  Piero Sartorio uses the Italian name “Ettore”. His original full name was George Hector Huntriss (1895-1965).

Hector Huntriss wrote this letter to Damiano Sartorio while he was in Castelfranco – north east of Italy – during the WW1 as Lieutenant of the British army.

This is the translation without a number of question marks and remarks he puts asking for advise about his Italian which, in fact, is astonishingly perfect!
I also jumped a bit where he mentions a shipment of goods between Pinerolo and Liverpool.

Dear Mr. Sartorio,
I am now in Castelfranco, were I am the head of the English station. What a nice life; there is little to do and there are lots of people to do that. I spend my time by the fireplace studying Italian while the guards (there are 6) do the job. Here there are [missing paper] in the town.
The military commander is and old colonel coming from Piedmont. Sometimes we talk together in Piedmontese.
We sleep together (but non in the same bed) in a cellar and we wake up in the morning almost freezing.
At night, when there is the moon, Germans come each night launching bombs on the station and sometimes on the town. I was in Padova last week and they have been there also as you know from the newspapers.
How things go in Pinerolo?
I will inform you if I will be around in Pinerolo and you will have to come with me the eat the “green sauce” and garlic.

The letter was written on the back of this military form.