It is already plenty of books and sites describing in detail history, glory and sufferings about mining activity in the valleys.

Mining is probably amongst the toughest jobs in the world. And it was more in the past. Nevertheless it was also a fortune for the area. While in the surrounding valleys people were emigrating looking for a better life abroad, here they could find a stable employment and sure salary in the mines. So, in a way, mining preserved culture and history form dispersing in the world.

Nowadays, one big talc mine is still active run by Riotinto. One single mine. One gallery which alone produces yearly more talc that some decades ago was produced in dozens of galleries with hundreds of workers.

The effects of the mining activities on the daily life of people have sharply reduced but they are still very visible in the older people. The talc of this area, was known already in the 19th century. At the very beginning it was collected at about 2000 m elevation where it naturally appeared on the surface. Over some time it was necessary to start following the mineral dyke underground.


At the beginning the mines were very primitive and drifitng was done dough without any proper mining technology. The main  mines company was called " Anglo Italian Talc and Plumbago Mines Company" whilts the other were normally individuals or families digging the mineral.
The situation worsened over time and at the beginning of the 20th century the issue was well known. Ercole Ridoni, a scientist working in the local main mining company in the 1920s comments like follows.The situation is very dangerous. Legally, due to the Sardinian law of 1859, talc was a mineral linked to quarry legislation which means that the owner of the ground owns the mineral underground. So anybody drifts tunnels without proper organization aiming just to reach first the mineral bank, as the law reserves the right to exploit the orebody to the first that reaches it. Different galleries are build closed one another. Rock fall risks were very high.
It should be important to move talc under the laws of the mining minerals which would lead to more legal constraints, more productivity and less risks.


This is what has happened with the law of July 29, 1927 which declared all the underground minerals property of the state. Which in turn means that proper authorization are needed ad fees are to be paid. This accelerated the aggregation process which was already going on and over few more years, dozens of small mines companies progressively become one single company. The “Talco e Grafite Val Chisone”.

This one run the business up to the 1990s when Riotinto took over.
Over two centuries more than 100 talc galleries were excavated with various lengths and different success. 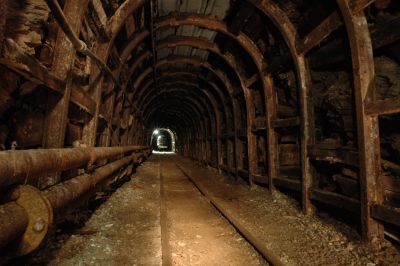 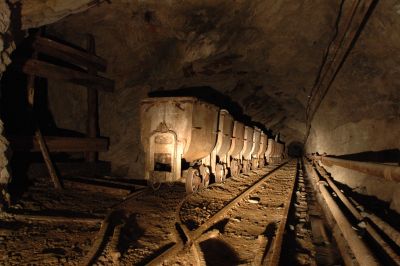 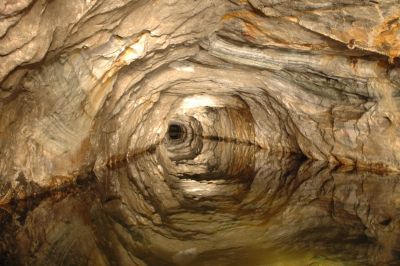 Water reservoir. It was common in the big mining strucures to make underground lakes to capture water and keep it available for the works. 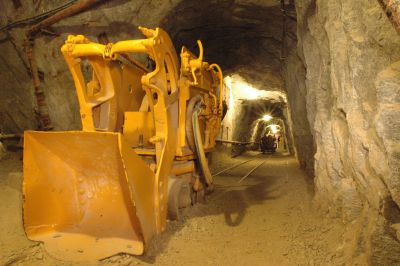 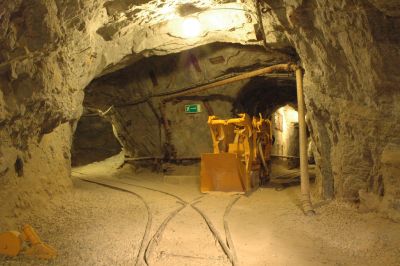 The tunnel splits in two.


Pictures taken at Museum Scopriminiera in 2005